WHAT IS SOLAR MODULE EFFICIENCY, AND DOES IT REALLY MATTER?

A lot is said about the efficiency of solar modules, and quite a bit of it is rubbish. So, I thought I would use this blog entry to clear a few things up.

WHAT IS SOLAR MODULE EFFICIENCY?

Solar module efficiency can be defined as the amount of solar energy (ie sunlight) which hits the surface of a solar module and is converted into electricity.  It is expressed as a percentage.

I would say – generally not, and here’s why:

In the example below we have two solar modules. 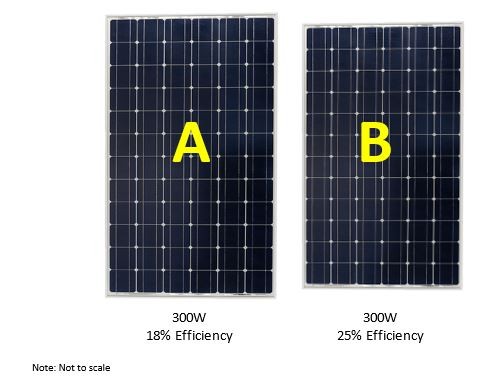 So, if the only difference is that Module B can be a bit physically smaller, the only advantage is that it takes up less roof space.  Which means it’s only important if roof space is an issue.  It is true that that a smaller solar module will require less additional componentry such as wiring and racking, but you are only making very small financial savings on this.

You would think that a solar module that is smaller, that uses less material and is easier to transport around the countryside, would be cheaper to buy.  This really isn’t the case though.  Higher efficiency usually means a higher price tag.  This is probably due to the higher efficiency solar modules being better overall quality though.

Here at Tropical Energy Solutions we often explain energy use and solar generation by comparing them with how we use and think about a car (it just seems to get the message across a bit easier).

SO WHY DO MANUFACTURERS AND SALESPEOPLE BANG ON ABOUT IT?

This is very much the world according to Mark:  If you think about all of the solar panels you have seen on the roof, in newspapers or magazines, and on the TV, what is the thing that is different about them?  Probably not much.  So, manufacturers and sales people need something to differentiate the products they are selling that customers can understand and efficiency, like a car’s fuel efficiency, is something that most customers do understand.  If they started telling you about temperature coefficient, power tolerance or the number of bypass diodes, they may lose you.

Solar module efficiency is really not that important unless you have limited roof space to install the modules.  It can be an indicator of the overall quality of the solar module, but I wouldn’t use efficiency as the deciding factor in choosing a particular brand or model.